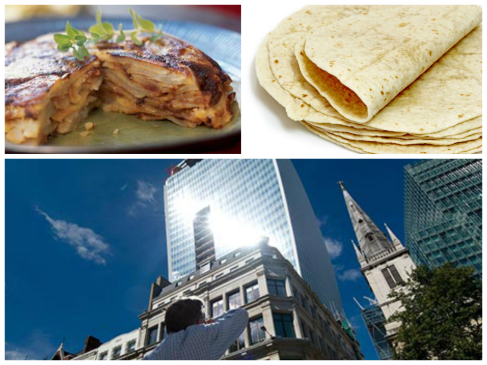 So, my partner suggested to me yesterday that we make a tortilla. At first I thought he meant the external part of a taco (which by definition means both the corn or wheat tortilla and its filling) but he was actually short-handing the tortilla espanola, or Spanish omelette. (Anyone know the etymology of this culinary split?) It’s one of the most common tapas in Spain and seems ridiculously easy, even to a novice like me. Who doesn’t like egg and potatoes?

In other news, the blog io9 recently featured an article about a skyscraper under construction at 20 Fenchurch Street in London that can fry both cars and eggs. Colloquially called the “Walkie Talkie building,” its curved surface acts like a gigantic solar panel-cum-magnifying glass for a few hours of the day and has, according to the British press, melted part of a Jaguar. Gives several new senses to the warning “Look out below!”

We can’t all fry our eggs in the streets of London, though. For this tortilla recipe, a pan will have to do. Pictures to come!